Star Trek on the Big Screen 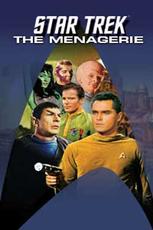 I told you a while ago about the advanced screening of the Original Series of Star Trek in theaters across the country. Well, last night was the show...and it was certainly an adventure.

We'd read that the show had sold out and the theater had added a second showing to make up for it. So, naturally, we got there early, expecting a crowd. Needless to say, there was no crowd. We got our seats 30 minutes early and by the time the show started, there were, at most, 20 other people there.

So, the show starts. It began with a welcome message from Gene Roddenberry's son where he detailed how they went about updating the show for HD DVD. The audio was very low, so everyone got really quiet, straining to hear. Suddenly, about 10 minutes into this introduction, the audio cut out completely. People started making booing noises and yelling for the technician to rewind.

The audio came back a minute later...but it was the wrong audio. We were listening to people screaming and what sounded like sci-fi noises...but definitely not Star Trek noises. All of a sudden, the unmistakable sound of Star Wars lasers came on, followed by the distinct sound of Chewbaka roaring. By this point, people were laughing in that, "this really sucks, but I can't help but laugh" kind of way. It was terribly ironic.

Well, the audio finally came back on and the show progressed. Several times throughout the screening, the video and audio would freeze and jerk forward slightly before righting itself. If I had to guess, I would say that they were simply playing a DVD over the projectors...a DVD with fingerprints.

And, to top things off, when the show was over, the lights didn't come on. The credits were rolling and the room was pitch dark...not even a little bit of light was on. People were busting out their cellphones to light their way out.

Never before have I met such a complaining group of people. I realize that things went wrong in the show, but they were very vocally voicing their plans to demand a refund, blah blah as we were leaving.

But, the HD looked really darn good and the updated visual effects seriously made the show seem more real. I look forward to someday watching more of the episodes on the HD DVD set.

And it made me all the more excited about the upcoming Star Trek movie!
By: Ryan
Email ThisBlogThis!Share to TwitterShare to FacebookShare to Pinterest