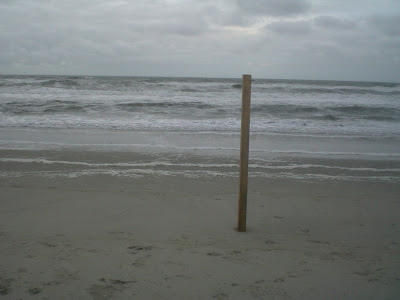 We went to the beach again yesterday. Crazy wind, no swimming signs, huge waves, but not quite as cold. So we sat there, enjoying the intermittent sun while we read, talked, snacked, or played in the sand. The latter was mostly the little kids, but I have to admit, I joined in the fun.

I happened to notice that about 50 feet away, being washed in and out in the surf, was a large wooden post, probably a 4x4 and about 6 or 7 feet long. Well. That gave me an idea. I dragged the post over to our area and began digging. I dug a nice hole, probably a foot and a half deep, and dropped the post into it. The tide was coming in, so I had to work quickly.

I filled in the hole, packing it very tightly, then built up another foot of sand in a mound around the post to ensure it stayed securely against the water.

I walked out there last night to see if it was still standing. Not only was it still standing, it was standing with authority! I checked out firm it was, and it was securely cemented in there nice and strong.

I haven't checked it yet this morning, but I fully believe it is still there. Oh, and guess what? While I was walking yesterday, I found three, yes three more posts up and down the beach. I'll be digging them into the beach later today. :-)