A long-time Pebble wearer's opinion on the Moto 360 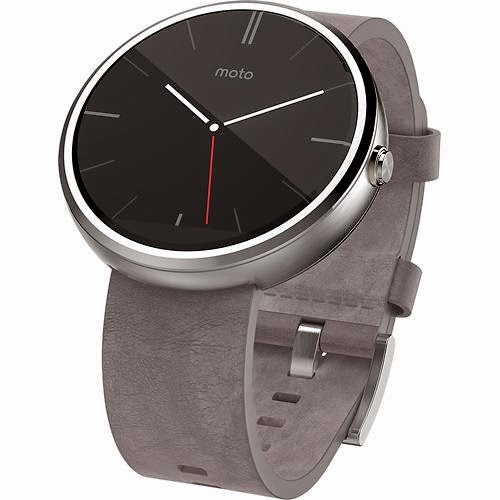 I've been wearing my Pebble watch for about a year and a half now and I still like it. I am totally sold on the idea of smartwatches and have been on the lookout for a possible upgrade to my Pebble, but nothing has caught my eye. So when the Moto 360 recently went on sale, I decided to go for it. I wore it for 4 days and then returned it.

To be honest, it doesn't compare. Both have their advantages and disadvantages, but I think in most respects, the Pebble is a superior product. The Moto 360 looks far, far nicer than the Pebble, and Android Wear is a very capable watch OS. But its battery life and screen kill it as a product.

It looks so much nicer than the Pebble that I had a really hard time deciding whether to keep the Pebble or the 360. As an actual product that I want to use, the Pebble beats it handily. But as a nice looking accessory that I wear, the 360 is so much nicer.

Android Wear vs. Pebble OS
I'll be brief here. Pebble's OS is faster, more responsive, and easier to use than Android Wear. Wear is extremely unintuitive...you never know whether to swipe down, up, left, or to tap, or to long press. And (at least before the recent update) the screen would dim and go back to the watch face after a few seconds in an app. So if you're controlling music, and want to skip forward, you have to wake up the watch, swipe up on the music controls, then tap skip. On Pebble, the music controls stay on the screen until you back out of it.

Notifications were an issue, too. On Wear, when an email came in, it wouldn't always go fullscreen so I could actually read it. Sometimes it would, but there didn't seem to be any pattern to it. More than half the time, I'd have to swipe up to read the email. And the screen timeout is so fast that I could never read the whole thing before the display went back to sleep.

Apps were also a problem. I know Android Wear doesn't want you to actually dive in and out of apps...that kind of goes against their product vision. But with Pebble, I can hold down a button to instantly launch an app (Nest thermostat controls, for example). On Wear, if I want to find the Nest control app, I have to tap the screen, scroll down to find the app (if it's not in recently used apps, you have to scroll clear to the bottom and tap Start..., then scroll through all apps to find the one you want). It was so cumbersome that I stopped even trying after the first day. Being able to change thermostat controls from my watch is a huge feature for me and one of the things I use most often on my Pebble.

Voice control proved to be a total novelty on Wear. I thought I'd use it a lot, but really, who wants to talk to their watch? I used it once or twice while in the car by myself, but nobody wants to talk to their watch around other people. Maybe this social stigma will change in time (nobody thought we'd get used to holding 6" phones against our heads either), but for now, it's a fun novelty that I never used.

The Moto 360 itself
Hands down one of the most beautiful watches I've ever worn and arguably the best looking smartwatch available right now. But it was a seriously flawed product. Terrible battery life, constantly sleeping screen, and a fragile beveled glass screen all combined to seriously detract from the experience.

I was only getting 12 hours of battery or so (with Ambient Mode off), which I'm told is not average for the 360 and that my unit may have been defective. So I'll forgive my battery issues. But even if battery had been great, the watch still had unforgivable problems.

The beveled glass screen, while beautiful, made it extremely prone to scratches. One brush against a concrete wall without a plastic/metal rim to protect the glass, and it scratched immediately. It made me very paranoid to wear the watch even at home.

Finally, the watch was so desperate to save battery that the screen would turn off after a mere 5 seconds and I couldn't find any way to change that. So if you're scrolling through a menu (there are lots of menus), or reading an email and have to look up for a few seconds, you'll look back down and the watch is black. Waking it back up does not return you to where you were all the time and often goes to the watch face. It was extremely frustrating.

My Perfect Smartwatch
The Pebble isn't perfect. The 360 was far from perfect. The Apple Watch won't be perfect either. So what is the recipe for a great watch? Here's my list (these are realistic items, not a dream wish list)

If you're an Android nerd like me, you're probably thinking that there already is a watch that matches what I've described: the LG G Watch R. That one may be the perfect watch for me and I'm seriously considering it. It's a bit expensive for me, but it's still cheaper than the cheapest Apple Watch, right? :-)


Conclusion
Smartwatches are here to stay. Apple is working extremely hard to make sure that's the case, as are the existing Android Wear players from Samsung and LG, to Sony and Motorola. There will be new watches announced this year and next year, and prices are sure to come down over time. I know I'll never be without one again and hopefully my next one can solve the problems that I experienced with the Moto 360.