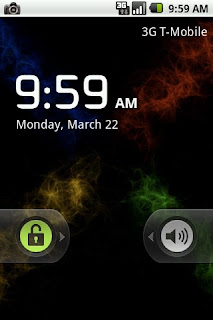 It's been a few days now since I rooted my G1, and I am really enjoying using the newest version of Android, version 2.1. On the whole, not a whole lot is different from past versions, but there are dozens of small improvements that add up to a really nice experience.

I've been using Android since it was first launched, and I've seen it go through multiple iterations and improvements. Each one has built on the previous one and added new features, new applications, and new ways to use the phone. In addition, the past year and a half has brought multiple new Android devices to market, including the Nexus One, Google's own handset that they're selling themselves.

The Nexus One was the first (and currently only) device to ship with Android 2.1, though Google and the various phone manufacturers have promised that many existing Android phones will receive the update. The G1, however, has yet to receive the update and there has been no communication regarding the update. So, I decided to take matters into my own hands and update myself. You can read my post about the rooting process for that story.
Android 2.1 is a very nice update from previous versions. Like I said, not a whole lot has changed, but the little things add up. Things that all come together to make a much improved user experience overall. Let's take a look at a few...

Those are just a few of the more notable improvements. I am really liking it, and now that I have it, I can honestly say that I will never go back to using 1.6 again. Android has made such incredible progress over the past year and a half that it's almost laughable to think back to the early days. When the G1 first launched, there was no software keyboard, no video recording, no notifications of app updates, no batch operation in Gmail, less than 50 apps in the Market, etc.

There's more exciting stuff coming, too. Android is being updated at a breakneck pace and by the time my contract is up and I'm ready for a new phone, there will be even more cool stuff to write about.
By: Ryan
Email ThisBlogThis!Share to TwitterShare to FacebookShare to Pinterest
Newer Post Older Post Home