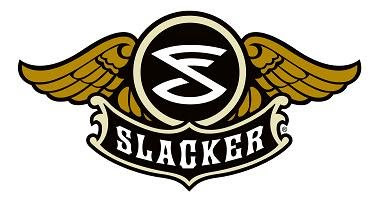 I have to start this post by saying that I canceled my XM subscription a few days ago. We've had two radios on the subscription for almost 4 years and it was slightly sad to cancel it. But between XM's recent programming changes and the fact that it costs us over $200 a year, it was time to reconsider. But I've come to rely on XM's music selection in my car and was dreading going back to terrestrial radio. So I set off on a mission to find a substitute for XM's music but that was very cheap.

That's when I discovered a music service that I honestly can't believe I'd never heard of before. It's Slacker.com and their service is top notch. It allows music searching and playing similar to Pandora, but they also have dozens of stations ready to go. Everything from Country to Comedy to Pop to Punk. Using the website is easy and if you create a free account, you can even make your own custom stations that you can tweak to your liking.

It really is a pretty incredible service. The free service allows you to skip 6 songs per hour and plays one or two ads per hour. They also have a Plus service for $3.99 per month that allows unlimited skips and no ads. Basicly, the service creates a massive playlist and everytime you refresh the player, you get more of the playlist. This means that you can still get constantly new and updated music, but you don't have to pay monthly and you can take it with you. It doesn't need an Internet connection to play, meaning I can take the portable player in the car with me, and then just refresh its music every night when I get home.

I decided to take the plunge and picked up a generation one Slacker player, called the Slacker G1 (oh the irony ). The newer G2 radios are out now, but they start at $199. Maybe I'll get one of those down the road. :-)

So far, the G1 player is excellent. It has far exceeded my expectations in every respect. Sound quality is considerably better than XM, and the playlists are both deep and very long! We listened to one playlist non-stop for over 16 hours the other day while driving and while we heard a few repeat songs, it was still playing new music right up until the end of the trip. A refresh when we arrived delivered even more new music.

The screen on the G1 is very large, which might not lend itself to the most portable use, but for listening in the car, it's perfect. The player displays full album art, name of the song, what album it came from, and if you want, you can view full biography details of every artist. It even displays what artist is coming up next.

So, I have officially become a Slacker convert. I am trying to share how cool the service and portable players are with anyone who will listen. It's the best music service I've ever used, hands down. The only thing that could make it perfect, at this point, would be if Slacker would release a home/car dock for the player. One was rumored to be coming soon , but nothing has been said recently.

I strongly encourage everyone to check out the web player at Slacker.com. If you like it, you should definitely consider purchasing a portable player. Slacker sells the G2 directly, but it's expensive. For a cheaper alternative, check out the G1 unit that I have on Amazon for only $79. You won't be sorry.

UPDATE: The Amazon price has changed, making the older G1 model the same price as the newer G2. So if you're interested, I suggest simply buying the player directly from Slacker .
By: Ryan
Email ThisBlogThis!Share to TwitterShare to FacebookShare to Pinterest