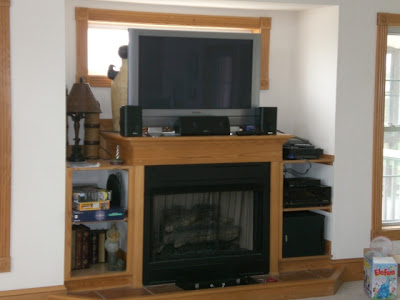 So everyone watched a movie last night. I came up to discover that they were watching it just through the TV speakers. Slightly shocked that they weren't using the expensive surround sound, I thought I'd be the hero and switch it on for them. Well. I turned the thing on and sound started coming out. From just the left speaker. I tried for about 10 minutes during the movie, trying to keep my head out of the way, but to no avail.

I gave up and let them finish the movie with just the TV speakers. But I vowed to finish the job.

So I went straight over to the system when I woke up this morning. I pulled the receiver off its shelf and began trying to make sense of the snake's nest of wires back there. I couldn't make heads or tails of how the darn thing was wired, so I just decided to strip it all out and rewire the thing from the ground up. One cut finger, a pair of pliers, scissors, two knives, three remotes, a flashlight, a left over coil of wire, and two hours later, it was all finished. And I got the kitchen speakers working to boot. :-)

So I'm fairly proud of myself. The subwoofer sounds great now that I turned its volume up, and all five of the other speakers work perfectly. But all I can say is that we'd better watch a movie tonight after all that. :-) In other news, the red "no swimming" sign is up again today. We might wander down to the beach later to check things out, but for now we're all either inside or hanging out by the pool. Oh, and the iPhone was announced for the United Kingdom today. :-)

UPDATE: Well, the receiver just died. Now it says "POWEROFF" every time I turn it on. We had full digital sound for about 10 minutes. So...there's an identical receiver downstairs...I might try swapping them out. We'll see.