LEDs in the car 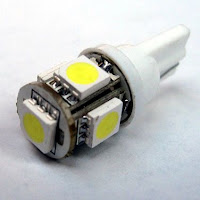 UPDATE: Be sure to read the update at the bottom of the post for details about LEDs and weird electrical issues with some cars.

The previously mentioned Project LED has taken a new turn recently. My original plan was to gradually replace all the house light bulbs with LEDs, thereby saving energy and money, while buying bulbs that will last as much as a decade.

That plan is still going, of course, but my new project has been to replace all of the car bulbs with LEDs. It's easy to overlook the car bulbs as even needing to be replaced because, unlike house bulbs, you're not paying per kilowatt hour on the electricity your car bulbs use. So why replace them at all?

LEDs run very cool, to start, meaning less excess heat which can damage or leave black marks on other electronics over time. 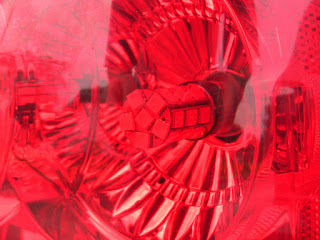 In addition, LEDs last essentially forever. Most of the car LEDs I've seen have 50,000+ hour lifespans. So if you drove your car for 2 hours a day (and the bulb was on the whole time), 365 days a year, those bulbs would last 68 years. Even if you drove 8 hours a day, the bulbs would last 17 years. So either way, these bulbs will very likely outlive the car they're going into.

They're also seriously inexpensive. If you're willing to buy them on eBay from Hong Kong, you can get bulbs for as little as $1 or $2 each. Even the off-brand replacement bulbs at Walmart aren't that cheap.

Next, LEDs use drastically less power than incandescent bulbs. For example, the LED dome light I got for inside the car uses 0.5 watts compared to 8 watts used by the old bulb. And while the reduced power may not be as immediately apparent as a house electric bill, it does have advantages. It seriously lightens the strain on the electrical system of your car, both when the engine is running and when it's not. The LED dome light can be on for 16 hours before it's used the same power as the old bulb being on for 1 hour. Never worry about an accidentally drained battery again.

And when your car is running, all the electrical stuff that's turned on is putting a load on the alternator. So when you're driving at night, all the lights around your car are on, in addition to the air conditioning or heater, the instrument panel lights, the radio, the cellphone charger, etc. So by using LEDs on exterior lights, you're freeing up considerable alternator load, allowing it to perform better for the other stuff that's turned on.

LEDs also provide a safety factor over incandescent bulbs. Since LEDs have no warm up time, they light up at full brightness the instant you hit the brake pedal. Incandescent bulbs take a few milliseconds to reach full brightness. That may not sound like enough of a difference to worry about, but at highway speeds, those milliseconds translate to much faster reaction time. When driving at 60mph, if you hit the brake, the car behind you sees your brake lights sooner and has as much as 17 extra feet of stopping distance. 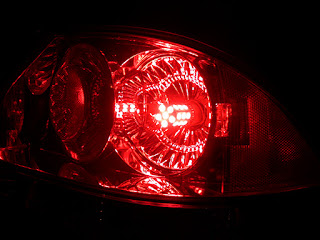 Buying Advice
If you're looking to buy some LED car bulbs for yourself, here are a few tips.

Conclusion
I honestly can't understand why auto makers don't ship their vehicles with LEDs pre-installed. They just make so much sense from every standpoint. They're cool to the touch, use way less power, are cheaper, come on instantly, and just look good. Just imagine the lessened strain on the alternator if you replaced every bulb with LEDs. Especially given the price, I'd definitely say it's worth it. Happy shopping!

For example, when an LED bulb is used for a turn-signal bulb, it will almost always blink extra fast, because LED bulbs use so little power that the car thinks a bulb is burned out.

Finally, in some cars, just sticking an LED bulb into a socket will blow a fuse. The cause is, you guessed it, tons of extra, unused power feeding back and blowing fuses. Sometimes the fuse that blows isn't even the one for the lights you're replacing. In one of our cars, for example, it blew the fuse for the instrument panel inside the car. Go figure.

None of these issues are serious, and all can be fixed by putting the old incandescent bulb back and/or replacing the blown fuses. If you still want an LED bulb in a spot that causes weird problems, then you'll need to add some resistors. These can be purchased fairly cheaply on eBay. The resistors are easy to install and easily attach to the existing wires.

However, using resistors counteracts most of the benefits of using LED bulbs in the first place. Resistors work by converting voltage to heat, so when you add one to an LED bulb, you're once again using the same amount of power as an incandescent bulb, and you've got something that gets really hot. So now the only benefits are the long life of the bulb and the instant-on safety benefits. You really might as well use incandescent bulbs, which are obviously easier than dealing with resistors.

But if you really want that look of LEDs, and your car doesn't like the bulbs by themselves for whatever reason, then you'll need the resistors.

So, all that to say don't panic if you put in some LED bulbs and something odd happens. Par the course with LEDs and cars that weren't designed for them.
By: Ryan
Email ThisBlogThis!Share to TwitterShare to FacebookShare to Pinterest
Newer Post Older Post Home