If you read any popular tech blogs, you've no doubt seen lots and lots of lists detailing the best Android apps. Usually, though, these lists tend to focus on apps that are already hugely popular like Google Sky Map, Pandora, or Aldiko.

But there are lots of apps that most people have likely never heard of. These are great apps that lots of users would probably benefit from, but if nobody tells them the apps exist, they'll never be able to take advantage of the cool features these apps bring. So, I would like to share 7 very useful apps that most of you reading this are probably quite unaware of.

UPDATE: This post has been updated with links to the Play Store for each app.

WorldTour
This is a very simple, but extremely cool little app. It's been around for a very long time and yet is still relatively unknown. It automatically changes your homescreen wallpaper every 30 minutes to an image from a live webcam. It provides a list of dozens of webcams from around the world to chose from and then ensures that your homescreen is showing a nice fresh image from the webcam all the time. You can even define your own webcam URL if one you want isn't in the list. (Watch for a future blog post with more details on custom webcams Update: Here's the post).

KeepScreen
This is another simple app, and one that you didn't realize you needed until you have it. It allows you to keep your screen always on when certain apps are running. For example, I have it set to keep the screen on when Maps are running because I often use Maps in the car and I don't want to have to keep waking the phone up. This will reduce your battery life, obviously, but it's surprisingly useful, I recommend giving it a try.

c:geo
This app is, quite simply, the best Geocaching app I have ever used. Easily the best Geocaching app for Android, and possibly the best on any platform. It works totally independent of the browser and is able look up, help you locate, and then log your finds. Some of its extra features include a live map, which updates as you move around; searching by address; compass directions or driving directions, etc. It really is an extremely full-featured app and if you're into Geocaching (or want to be), this is the app to check out first.

3banana Catch Notes
Update: This app has been renamed Catch and is completely new. There are lots of apps available on smartphones for taking notes. Most even ship with a standard, bare-bones app for jotting down simple notes. If you want more, though, 3banana Catch is a very full-featured app that has a very dumb name. It syncs all your notes to Snaptic.com Catch.com, lets you insert pictures into notes, supports tagging by hashtag, and lets you create QR codes from your notes for sharing with others. It also comes with a widget for immediate note creation right from the homescreen. 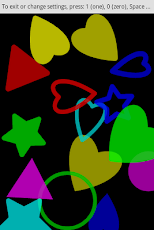 Toddler Lock
This app should be pre-installed on all Android phones sold to those with small children. It is pure, straight-up brilliance. It locks the phone so all buttons do nothing, and lets children (or adults) draw on the screen with colorful shapes and fun noises. Amber loves playing with it and I can happily hand her my phone without worrying about her messing things up or deleting my stuff. :-)

Gmail Unread Count
This app no longer works with newer versions of Gmail.
This one is actually a widget, not an app, but it's still very useful. It lets you create a small, icon-size widget on your homescreen that you can use instead of a Gmail shortcut. There are lots of different custom looks for it, but I chose to have it look like the stock Gmail icon. The huge benefit, though, is the addition of a little red bubble with your unread count. Very subtle, but very useful.
Those of you with HTC Sense devices like the Hero, Incredible, or Evo, probably don't need this, since I think Sense devices already have unread counts on the icons.

CallTrack
I don't personally use this app, but it's so remarkably useful for people who need it that I felt it was worth including on the list. It very quietly runs in the background and logs details about your phone calls. Things like time and date, duration, who you called, who called you, etc. are all logged and added to a Google calendar that you specify. The benefit is that you can look at your calendar online and see an exact record of all of your phone calls. This is hugely useful for people who make time sensitive phone calls or who simply want an easy way to look back at their call history.

So there you have it. These are 7 of the most useful and yet most unknown apps available for Android. I think everyone could benefit from at least one app on this list, and many of you would probably be able to use all of them.