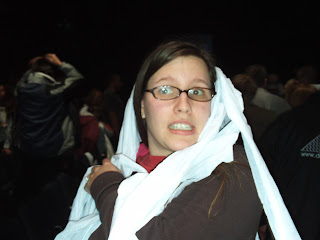 Today we got up early and drove over to Universal Studios and Islands of Adventure! We were among the first people into Islands of Adventure and as such, were able to almost walk right onto some of the bigger rides including the Incredible Hulk, Spiderman, and Dueling Dragons (both of them).

Afterwards, we explored the park and visited some of the other attractions. We watched the excellent Poseidon Adventure, rode the Cat in the Hat ride, and visited the Visitor's Center in Jurassic Park. We ate lunch at Mythos, which has been voted best theme park restaurant by themeparkinsider.com several years in a row. It was really good, too! It had the feel of a fancy restaurant with the excellent theming of a park. I recommend it!

After we'd ridden Spiderman one more time, we left Islands of Adventure and trekked over to Universal Studios park. There we rode E.T., the MIB ride, and watched the very cool animal show. After that, it was over to the other area of the park where we went on the new Mummy ride. It was quite awesome. Shelsy said it's her new favorite ride ever and I have to say, it's certainly up there on my list. If it hadn't made me slightly queasy, I probably would have enjoyed it even more. It is an indoor roller coaster type ride that involves going backwards, shooting through the dark, fireballs, and other cool stuff. :-)

Oh, Universal also uses a very cool system for their lockers. When you want to rent one (which is free for the first hour and a half...very handy for storing stuff while on a ride), you walk up and touch the screen. You then press your thumb against the reader twice so it can get a good reading. When you're ready to claim your locker, you enter the locker number, then let it scan your thumb again. Presto, your locker is open! Quite cool.

After a few more attractions, we headed over to the theater to see Blue Man Group! This was a surprise for Shelsy, but she figured it out at the beginning of the day when she saw the huge signs advertising the show inside the park. :-) The show was beyond amazing. If you've never seen them, drop what you're doing and go now. It's just so quality! And we had excellent seats, only a few rows from the front! Oh and we got to participate in this show. Yeah, let me tell you that story. We're sitting in there about 20 minutes before the show starts and one of the staff comes over and asks if we want to be a part of the show. He explains that all we have to do is walk from the back of the auditorium to our seats shortly after the show starts and that the Blue Men will imitate whatever we do. So we agreed.

We were lied to. Not that I expected anything else, but that definitely wasn't what happened. An usher got us soon after the show started and led us to the side walkway. Suddenly, he said, "Let's go!" and began walking us through the isles back to our seats. The screen on stage started flashing orange with huge letters saying, "LATE ARRIVALS!" And the announcer voice was repeating, "You're late!" Meanwhile, the camera on stage was pointed right at us displaying us walking to our seats "late" while everyone laughed. It actually was pretty funny, but not what I'd expected.

At one point during the show, they fired off cannons shooting paper streamers into the crowd. Later, they unrolled massively huge rolls of paper from the back of the stage. The people in the back kept unrolling it and passing it forward. This was all while huge strobe lights lit up the entire theater. It was so much fun! There was paper everywhere and everyone was throwing it around. We all waded through ankle deep paper on the way out. :-)

Tomorrow is the Magic Kingdom! Very exciting! Oh, and I got video from Universal, but it's very late. I'll put it together in the morning. Check out the video of our trip to Universal below: