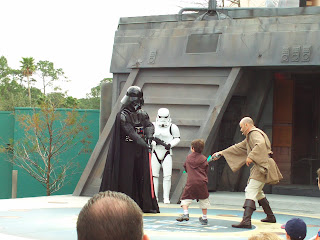 It still feels a mite weird calling it that, but that's the new name, so I'm trying. :-) Today, after a brief fiasco involving a hotel key locked in the room (I don't want to talk about it), we arrived at Disney's Hollywood Studios. Our first stops, naturally, were the Tower of Terror and Rockin' Roller Coaster! Both quality rides, methinks.

Then we visited the other cool attractions, including the Muppet 3D show, the Little Mermaid show, the Backlot Studio tour, the Great Movie Ride, and the rest. When we headed over toward Star Tours, we saw a group of people gathered around watching something, so we checked it out. It was a Jedi night teaching lightsaber skills to a group of little kids. We stayed to watch. The kids were adorable, especially one little girl, completely decked out in princess attire, who had trouble extending her lightsaber. Once the training was done, the Star Wars music started and doors at the back opened. Out strolled Darth Vader and tried to persuade the kids to join the dark side. The kids then took him on one at a time, putting their fighting skills to work.

As one of the kids was fighting Vader, two Storm Troopers came up and shouted for him to "Halt!" The Jedi told the kid to use the Force to push them away.

It was hilarious! After lunch, as we were walking past again, we saw the show going on a second time, and again stayed to watch. As one kid was fighting Vader this time, the Storm Troopers again came forward shouting, "Halt!" This kid, who looked to be about 5, stuck out his hand without any instruction and even made the choking gesture with his hand. Naturally, the Storm Troopers threw themselves backwards as the Jedi teacher said, "This guy's a natural!" :-)

We then watched the Lights, Motors, Action! car stunt show, which was amazing. Check out a clip of the unbelievable driving below.

Finally, we finished the day by watching the Fantasmic show in the rain. :-) It was cold and wet, but the show was extremely good, so it was worth it. :-)

Tomorrow it's off to Animal Kingdom! See you then.