After a several false rumors, I finally moved into a new office at work yesterday. My old office, which was right in Student Services, is going to become the new copier room, as the space previously occupied by the copiers is going to be converted into desks for two people. It will be considerably easier to put two desks where they are now then to get two people into my old office. So I moved out. 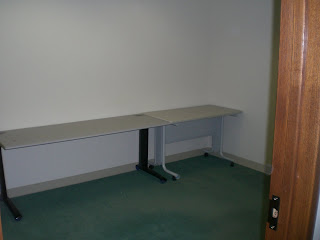 My new office is on the complete other side of the building...not a short walk by any means. But it's right next to the new video studio we've been setting up recently. That's another story, which I'll write about when it's finished. Suffice it to say that we've been spending the last few weeks getting equipment in there, putting up sound proofing foam, etc. to get ready for this new school year and the video requests that are sure to come from the teachers. 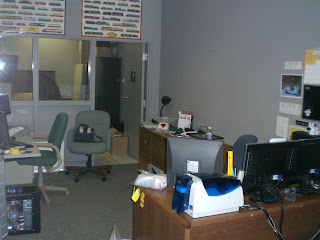 I will very likely be spending a considerable amount of time in the studio anyway, so having my office right next door is a definite good thing. The new office is slightly bigger (always a plus), but it's more narrow, making desk setup tricky. But we got everything moved in there yesterday and I got my computer, etc. set up today. The new office also has the convenient addition of an old server room behind it, which we are using for storage. There are two other entrances to the storage room, so I don't have my own private storage by any means, but it's still nice to have a place to stick empty boxes and junk.

Oh, and there's a window between my office and the storage room, giving me complete freedom to brag about my office with a window! :-) I also discovered a small refrigerator in the storage room (small meaning, like, less than two feet square), which I am very excited about. I can have all the cold sodas I want without having to hike to the vending machine. Brilliant! But it's a secret that I'm using it, so don't go telling anyone, okay?

So...yep, that's the story. And don't worry, I'm one of, like a million other people in the building who are moving. It's one big shuffle...we'll see how it goes. I'll report back later when the studio is finished. :-)
By: Ryan
Email ThisBlogThis!Share to TwitterShare to FacebookShare to Pinterest