So yesterday at work, we all got an email from one of the teachers. A very nice man who had two extra tickets to see Blue Man Group that he was making available at a discounted price. I jumped at the opportunity. Neither my wife or I had ever seen the show, but we'd heard from several sources that it's really good, so...we went!

In a word, it was unbelievable. We saw their How To Be a Megastar 2.0 show where they move through the instructions for how to become a successful rock star, all while poking fun at the rock culture through the years. It's actually really hard to describe what kind of a show it was. They combined elements from so many different types of shows that it was just unique. It was part rock show (with full band), part comedy routine, part Stomp, all rolled together with a ton of audience participation.

Even before the show started, they were entertaining us. About 20 minutes before the performance began, the big video screens lit up. A single line of orange text scrolled across: "Yell if you are paying attention." This continued up until the show started. The screens would tell trivia about BMG, ask the audience questions ("Yell if [blank] is true") and make fun of other Megastars.

Then the lights dimmed and the opening act began. A DJ named Mike Relm opened the show by showing us his live remixing of both music and videos (from Nacho Libre to Office Space to Zoolander). It was an amazing performance by itself. I knew videos could be mixed live, but I'd never seen it. That, combined with some amazing work by the guy on the video switcher, cutting between Mike's video mix and the live camera on his table made for an excellent show...and that was just the opening act! 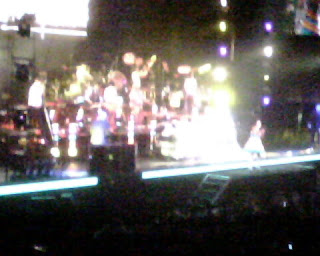 (Yes, that's the best picture I could get with my cameraphone. You can see one of the blue guys at the far right)

Then the fun really began. I am certainly not going to tell everything about the show because I think you should all see it immediately. But I'll cover it briefly. They did some absolutely amazing stuff with lighting and video. The stage had over a dozen LED panels that would change color or show videos during the show. It was subtle, but really cool. There was also a tiny camera that was on a very long cable that the Blue Guys would carry around the stage, pointing it at themselves, at the audience, into their instruments, etc. and the image was on the big screens for everyone to see.

I don't think there was a single thing about the show that I didn't like. It was just a quality performance all the way around. If you have an opportunity, you definitely have to go see them.