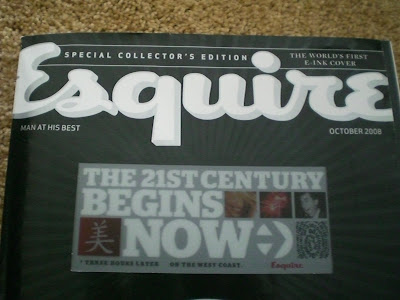 Yep, I got one! In hand, fresh from the newsstand. For the October issue of Esquire, they decided to release 100,000 issues with the world's first E-Ink magazine cover. The E-Ink display is the same technology used in the Amazon Kindle and Sony Reader. This is the first time it's been used in a magazine cover, however. And it looks pretty cool.

You can read more about it at Esquire.com.

I found one of the special e-ink issues in Borders today and snatched it up. There's a video of the display, as well as the second display on the inside of the cover at the bottom of this post. Of course, one of the first things I did was to take the cover apart to see how it works. It's pretty simple...a small circuit board with six (yes, six) button cell batteries on it. Then there are the two displays. Esquire says the batteries should last 90 days or more and that life can be extended by storing the magazine somewhere cold, like the refrigerator or freezer. :-) 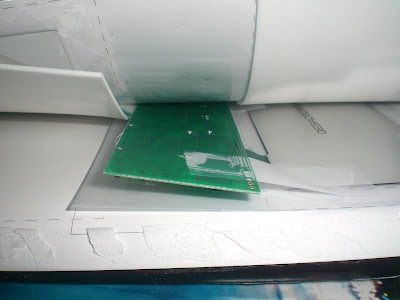 I haven't fully taken the cover apart yet, because there are a few people I want to show it to first. But after the novelty wears off, I fully intend to take it apart and hack the heck out of it. More posts on that will follow, I'm sure. :-)

But for now, here's a video of the coolness. Enjoy!